Gut microbiota changes correlate with health status. Literature data on gut microbiota show that all dietary changes can induce the alteration of gut microbiota composition. Mediterranean diet (MD) is associated with a reduction of all-cause mortality and in this review, Giuseppe Merra and collaborators analyzed its interactions with human microbiota. In particular, they explored the modulation of the human microbiota, in response to MD adherence, focusing the attention on polyphenols, polyunsaturated fatty acids (PUFA)ω-3 and fiber. Evidences suggest that MD is able to modulate the gut microbiota, increasing its diversity. In fact, a Mediterranean-type dietary pattern is associated with specific gut microbiota characteristics. The available evidence, suggests that gut microbiota of subjects that follow a MD is significantly different from subjects that follow a Western diet model.
Although the concept of microbiota is not yet well-known, the human intestine is colonized by millions of bacteria that contribute to its formation. The composition of the microbiota deeply influences the human health, and the diet plays a pivotal role on its composition. The interaction between diet and gut microbiota is mutual. While, the microbiota acts on digested nutrients, the influence of food has a strong impact on the intestinal microbial composition. Metabolic activities of the latter depend largely on the amount of non-digestible carbohydrates and proteins that reach the intestine. Animal and human studies of gut microbiota fecal samples showed that all dietary changes can induce a modulation of gut microbial composition. In healthy subjects, a balanced diet can ensure the formation of a good microbial flora, where the content of all species of bacteria live in a system of control but also of mutual balance [5].Through multiple studies conducted on the correlation between diet and gut micro-biota, it has been shown that a diet rich in fat, with high consumption of red meat and refined carbohydrates, and poor in fish, plant-based foods and fruit, may have a direct effect on the immune system causing dysbiosis. Dysbiosis is a structural and functional modification of the gut microbiota, capable of triggering severe inflammation, through a greater number of pro-inflammatory micro-organisms resulting from a reduction in diners, promoting mechanisms of immune tolerance [6]. The gut microbiota reacts quickly to dietary changes. In fact, it has been proposed that the diet is able to change almost 60%of its total structure [7]. In the gut, the dominant species are represented by the phyla Bacteroidetes, Firmicutes and Actinobacteria [8]. A diet that includes the consumption of animal proteins and fats is linked to the enterotype dominated by Bacteroides, on the contrary, a diet rich in carbohydrates is associated with the enterotype dominated by Prevotella. The major phylum present in the gut microbiota are Firmicutes and Bacteroidetes, which represent about 90% of the intestinal bacterial flora [9]. The main genera that make up the Firmicutes phylum are Clostridium, Enterococcus, Lactobacillus and Ruminococcus. While the main genera of the phylum Bacteroidetes are Prevotella and Bacteroides. Many pathological conditions are characterized by a dysbiosis of the intestinal microbiota [2]. For example, in presence of CKD, the alteration of the gut microbiota composition is characterized by the prevalence of Enterococcaceae, Lach-nospiraceae, Ruminococcaceae families and a decrease of Bifidobacteriaceae, Baceroidaceae,Lactobacillacee and Prevotellaceae families [2]. Moreover, it has recently been shown that dysbiosis is directly correlated with the onset of colorectal cancer (CRC). In particular, the presence of some bacterial species such as Fusobacterium nucleatum, Peptostreptococcus anaerobius and enterotoxigenic, Bacteroides fragilis can cause the proliferation of tumor cells, induce an inflammatory state and damage to the DNA with consequent impact on the onset of CRC. While, the reduction of probiotic bacteria such as Lachnospiraceae species, Bifidobacterium animalis and Streptococcus thermophilus, that seem to exert a protective action in CRC, is present in patients affected by this neoplastic pathology [10].The gut microbiota composition is strongly influenced by probiotics consumption (live microorganisms) that, due to their resistance, reach the colon temporarily and grow becoming metabolically active, but also through the use of prebiotics (compounds, often fiber, that induce the growth of beneficial bacteria species) [11].It has long been known that the microbial species promotes the growth and development of intestinal epithelial cells that are involved in the metabolism of important nutrients, such as carbohydrates, proteins and fats [12].At the base of human intestinal flora imbalance there are several causes, such as stress, infections, but especially the wrong eating habits. Therefore, if the balance fails, the intestinal microbiota can be altered in type, quality and structure [13]. In general, when a lowering between Firmicutes and Bacteroidetes ratio is observed, a microbial flora producing SCFA prevails, rather than TMAO. This condition is typical of Western-diet model (Figure 1). 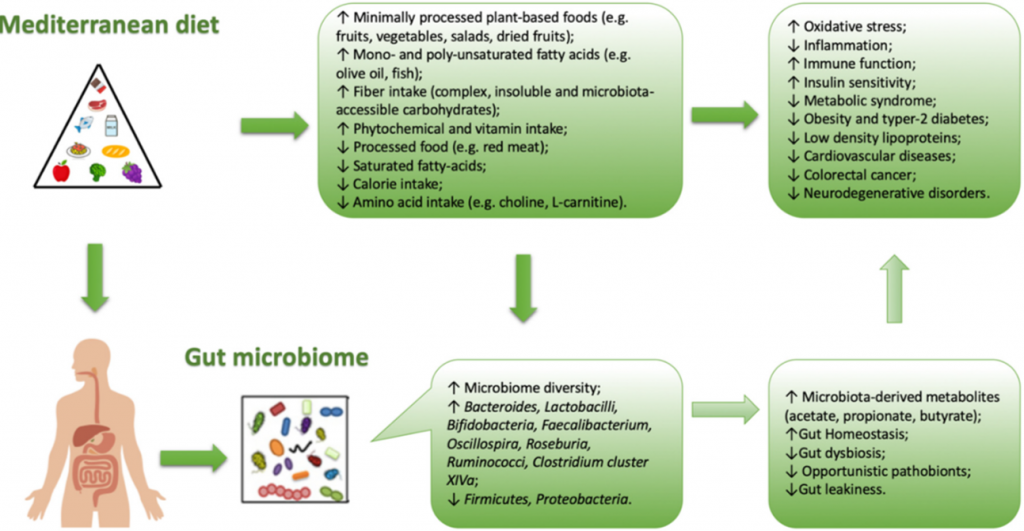 The MD is characterized by an high amount of dietary fiber, and also of polyphenols (which would exert a prebiotic action on specific strains) [14]. Due to the high production of SCFA (butyrate species), induced by MD, the microbiota in the subjects who follow MD, seem to contribute to incidence reduction of the of some type of cancers (especially the CRC) or of the cardio-metabolic pathologies [15,16]. The protective health effects associated with the consumption of a Mediterranean-type diet has in scientific literature long been recognized (Figure 2). 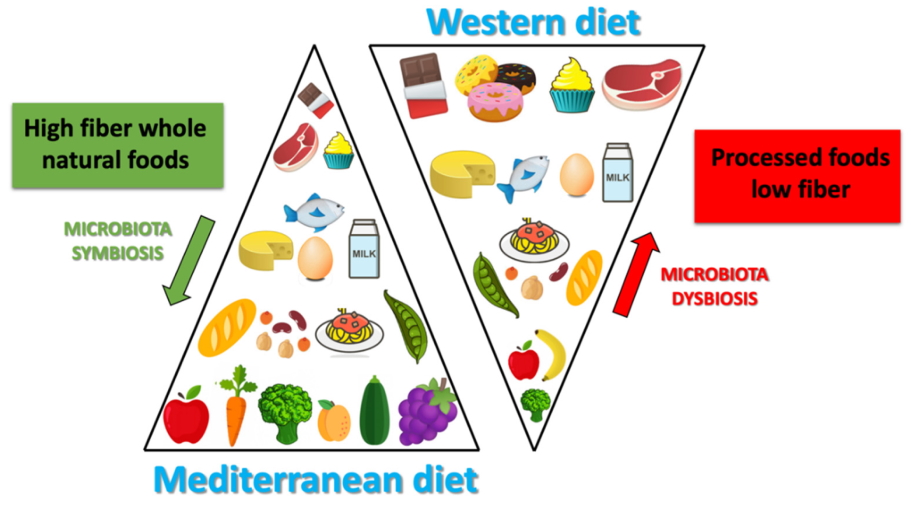 The combination of the dietary components typical of the MD and the microbiota composition leads to the production of specific metabolites, such as SCFA (represented in the feces of subjects that follow MD), conversely TMAO metabolites are present in higher concentrations in subjects that follow a Western-type diet. Studies of modification of the dietary pattern unfortunately show that it is not easy, at least in the short-term, in order to influence significantly, and above all stabilize, the intestinal microbiota. In a randomized controlled trial, Djuric explored the mucosal bacterial flora of the colon before or after six months of the Mediterranean or Western type experimental diet, without observing significant differences in the pre- or post-intervention microbiota [17]. In a study conducted in patients with metabolic syndrome fed with a Mediterranean or traditional diet for two years, the MD has instead shown that it could reduce, although only in part, the dysbiosis typical of the metabolic syndrome. In fact, the authors observed an increase of Bifidobacterium genera [15] in the MD group [3], that seem to have a possible anticanceraction. Their altered metabolism in neoplastic cells, would activate phenomena (such as histone acetylation) able to induce apoptosis [16]. The highest levels of SCFA, and species of butyrate, at colon-rectal level would contribute in particular to explaining the reduced risk of CRC observed in the Mediterranean world. This protective effect could also be attributable to the reduced presence of Fusobacterium nucleatum, often present in the colon of patients with CRC, and according to some authors perhaps causally related to its onset [18]. It is also documented that the levels of this bacterium increase in the colon just two weeks after switching to a Western-style diet [19]. Defining the causality of these associations is naturally complex. In an experimental mouse model, the use of a Mediterranean dietary mix significantly reduced the incidence of colon cancers associated with the treatment with azomethane, apparently due to the selective specific modification of the microbiota induced by the dietary mix [20]. Recently, Tosti et al. [1] investigated if the typical health benefits induced by the MD could be attributable from the specific microbiota associated with it. This hypothesis is beginning to gain support in the literature, even if studies that have analyzed the correlation between MD and the gut microbiota composition are scarce. Furthermore, most of these studies are transversal, which means that they have detected the characteristics of the microbiota in subjects with different degree of adherence to the MD model; in fact, these studies unfortunately are not useful to define the presence of cause-effect relationships. For this reason, it is important to understand whether the effects induced by dietary patterns act on the change in the gut microbiota composition and therefore on the probability of disease onset, or if these effects are exclusively attributable to diet-induced changes in the gut microbiota. Currently, it is estimated that more than half of the gut microbiota variability is attributable to the diet. In most of the published studies, in fact, the consumption of a Mediterranean-type diet is associated with a different microbiota from that associated with a Western-type dietary pattern. The microbiota, that could be brought back to the MD type, is first of all characterized, by a greater biodiversity (i.e. by a greater number of identified bacterial species), a feature that has a positive impact on human health. This feature of gut microbiota is defined “α-diversity” as it expresses the number of species present in the microbiota and is associated with the subject state of health [21]. More specifically, the Western diet is associated with high levels of Bacteroides, while the genus Prevotella is more represented in the MD. Gutierrez-Diaz et al. identified higher levels of Clostridium of cluster XIVa and Faecalibacterium Prausnitziiin subjects with a high score of adherences to the MD (MDSscore > 4) [22]. The same score, in another publication of the same group, was associated with a greater abundance of Bacteroidetes, Prevotellaceae and Prevotella and a lower presence of Firmicutes and Lachnospiraceae [23]. Also, Garcia-Mantrana et al. documented a lower Firmicutes-Bacteroidetes ratio associated with a high adherence to the MD. Typical food components present in the MD are associated with the presence of specific strains in the gut microbiota. For example, cereals consumption are related to the presence of Bifidobacterium and Faecalibacterium, Tenericutes and Dorea. The consumption of oliveoil and red wine are related to the presence of Faecalibacterium, the consumption ofvegetables are related to the presence of Rikenellaceae, Dorea, Alistipes and Ruminococcus, legumes are related to the presence of Coprococcus species [24].The same authors have also observed a correlation between the polyphenol content of the diet (typically high in the MD) and the presence of specific clostridium (XIVa) and Faecalibacterium clusters, capable of synthesizing butyrate and probably endowed with an action anti-inflammatory (like Akkermansia, also more represented in association with the MD) [25].
The MD modulates the gut microbiota increasing its diversity and changing the proportion of some bacteria. In fact, a Mediterranean-type dietary pattern is associated with specific characteristics of the microbiota, especially, but not exclusively, in the intestine. The available evidence suggests that the microbiota of subjects with a Mediterranean-type diet is significantly different from that of subjects with a Western food model. The Mediterranean microbiota would produce more SCFAs that should be able to contribute on the reduction of the risk of both cardiovascular and some tumor pathologies. However, the documentation of the cause-effect relationships between gut microbiota and the risk of these pathologies is incomplete and must necessarily include controlled intervention studies on the microbiota itself, in order to understand the link with dietary patterns.