Just two years ago, the world came to a standstill when the World Health Organization declared a COVID-19 pandemic. Since then, and according to official and updated data, there have been more than 460 million cases of this disease, which has also claimed more than 6 million lives (https://ourworldindata.org/explorers/coronavirus-data-explorer). 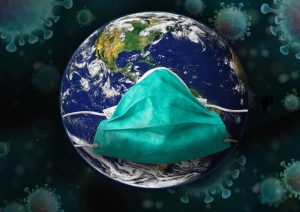 Today, thanks to vaccines and the development of different therapies, we seem to be seeing the end of the pandemic. However, access to these treatments is very unequal between countries and in many of them, other prevention measures are still the first tool to curb the serious consequences of the spread of the virus.

Different comorbidities have been identified as risk factors for SARS-CoV-2 infection and severity, such as cardiovascular disease, diabetes mellitus or hypertension. For its benefits against these comorbidities alone, it would be worth recommending the Mediterranean dietary pattern. In addition, its known effects on the immune system and microbiota might lead us to believe that it could have a protective effect against COVID-19.

We provided one of the first evidences of this protective effect in an article published in Clinical Nutrition (https://www.sciencedirect.com/science/article/pii/S0261561421001904?via%3Dihub) using data from the “Seguimiento Universidad de Navarra (SUN)” cohort. In a more recent publication, in Frontiers in Nutrition (https://www.frontiersin.org/articles/10.3389/fnut.2021.805533/full), we wanted to know not only the effect of this dietary pattern but also that of each of its components.

First of all, one aspect should be considered, and that is that it was not possible to measure other exposures of the participants, in terms of rigorous compliance with other preventive measures such as masks, physical distancing, hand washing and ventilation. To overcome this limitation, healthcare professionals, who were much more exposed, and on whom diagnostic tests were prioritized, were eliminated from the main analyses. In addition, the study data refer mainly to the “first wave”, during strict confinement in Spain. At that time, the differences between these two populations were even more marked, and preventive measures did not carry as much weight. Of the 9,413participants who completed the COVID-19 questionnaire, we assessed the 5,194 non-healthcare workers in the main analyses.

To assess the contribution that each component of the index could have on this effect, the most extreme quartiles of consumption of each food group were compared. Surprisingly, no significant results were found except in the case of dairy products, where low consumption seems to be protective. There are some studies that have found similar effects. One possible hypothesis is the need for calcium for SARS-CoV-2 to infect. 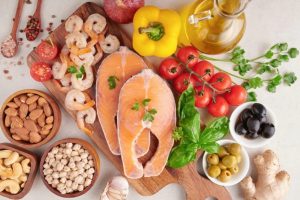 In any case, the clearest conclusion of this study is that the Mediterranean diet as a whole seems to be more effective against COVID-19, so recommendations based on dietary patterns should be prioritized over those of certain food groups. We thus highlight the synergistic effects of each of the components, which give the Mediterranean diet its great immunological, antioxidant and anti-inflammatory benefits. 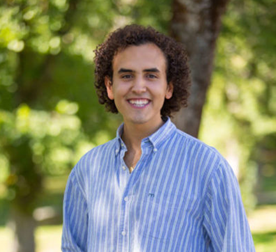 Rafael Perez-Araluce. I graduated in Pharmacy (2020) and Human Nutrition and Dietetics (2021) at the University of Navarra, obtaining the Extraordinary End of Degree Award. At the end of these studies, in February 2021, I joined the Department of Preventive Medicine and Public Health starting my doctoral thesis thanks to a grant associated with a project of the National Plan on Drugs. During that first year, I published 2 scientific articles in Q1 indexed journals as first author and in which we offered the first evidence that a dietary pattern could protect against COVID-19. Both publications had great repercussion in the media. I later obtained a scholarship from the Government of Spain to continue my PhD that focused on the effects of alcohol consumption. This included the implementation of a novel clinical trial.