The central west part of Argentina, where Mendoza province is located, is considered one of the great wine capitals of the world. The climatological characteristics of this region are optimal for producing high quality grapes and wines (Figure 1). Malbec, Bonarda, Syrah, Cabernet Sauvignon, Merlot and Pinot Noir are the main red-wine cultivars produced. Such wines from Mendoza are typically recognized for their high-quality organoleptic characteristics, being the color an important factor influencing consumer acceptance and preference. Color intensity, hue, and stability are the main color quality traits in red wines. These attributes are strongly conditioned by the presence, concentration, and composition of anthocyanins in the grape berry skin of red varieties, along with other constituents that influence color development and stability in grapes and wines (e.g., other non-anthocyanin phenolic compounds such as tannins). 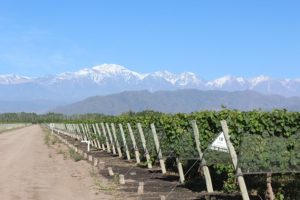 Figure 1. Mendoza is located in the foothills of Andes Mountains. Vineyards are planted at one of the highest altitudes in the world with the average site located between 2,000-3,600 feet above sea level.

Climate is determinant for grapevine geographical distribution, berry attributes and wine quality. Anthocyanins accumulate in red grape skin during ripening. Environmental factors such as temperature, exposure to light, and water availability can influence the concentration and composition of anthocyanins. Particularly, high temperatures may reduce berry color -and other quality traits- in some cultivars, according to previous studies. Thus, in the context of the ongoing climate change, viticulture regions around the globe may be negatively affected by the predicted increased temperatures. In the case of Mendoza’s viticulture region, a 2-4°C increase in mean diurnal temperature is predicted by the end of the century due to climate change. Considering this future scenario, in a recent study we hypothesized that such temperature increase will affect color intensity and other quality attributes in red grapes and wines from Mendoza, and we conducted experiments to test this hypothesis. To this end, a structure that increased mean diurnal temperature in 1.5-2.0 °C at berries site (Figure 2), compared to Control plants grown without such structure, was implemented in field grown vineyards of Malbec, Merlot and Pinot Noir. Berries from the Control (CTR) and the high temperature (HT) treatments were sampled at three phenological stages during fruit ripening (veraison, half-ripeness, and harvest) and anthocyanin concentration and composition, pH, and resveratrol and solids content were determined, in two seasons. 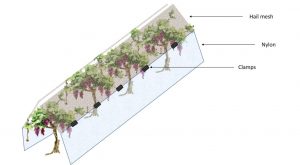 Our results revealed a cultivar-dependent response to HT conditions, with Malbec and Pinot Noir berries exhibiting significant decreases in total anthocyanin concentration (TAC) at veraison and harvest, respectively, while Merlot maintained pigment content unaffected under HT. In average for both years of the study, the decrease in total anthocyanin content under HT conditions was ~45% for Malbec and ~15% for Pinot Noir. For Malbec, the decrease in total anthocyanins was associated with reduced levels of delphinidin, cyanidin, petunidin, peonidin, and malvidin glycosides, and an increase in the proportion of acylated anthocyanins (AA) relative to non-acylated anthocyanins (NAA). Under HT, Merlot berries also exhibited increased ratios of AA/NAA, despite the fact that total anthocyanin levels were not affected (as mentioned above). The observed shift from NAA to AA in Malbec and Merlot grown under high temperature, increasing the relative content of acylated pigments over NAA, suggests that pigment acylation may be have a role as a stress-response mechanism for attenuating the negative effects of high temperatures, given that previous studies have demonstrated that AA are more chemically stable, and therefore less prone to degradation by high-temperatures. This shift from NAA to AA was not observed in Pinot Noir, a cultivar that does not produce AA because it lacks a functional enzyme necessary for the acylation of these pigments.

The other wine-quality variables analyzed (pH, resveratrol, and solids content) were not significantly affected by the high temperatures. Our results predict high, medium, and low plasticity with regards to color quality attributes for Malbec, Merlot, and Pinot Noir, respectively, in the context of climate change. This will certainly limit the viticulture areas suitable for these typical high-quality red wine varieties, grown under traditional viticultural systems. However, our results show that not all varieties are affected equally, suggesting that the identification and use of high temperature-resilient varieties may help attenuate the negative effects of climate change.