More than 1 million children and adolescents are affected worldwide by type 1 diabetes (T1D). Both insulin treatment and medical nutritional therapy are essential in these patients’ lives.

In particular, medical nutritional therapy is crucial in order to improve glucose control and reduce cardiovascular risk in T1D in youths. The 2018 International Society for Pediatric and Adolescent Diabetes (ISPAD) Guidelines recommend a diet with a composition in line with the Mediterranean Diet (MedDiet), which is based on wholegrain cereals, monounsaturated fats, plant-based food, reduced intake of red and processed meats, and it’s suggested to be beneficial for long-term health, reducing cardiovascular risk and lowering levels of HbA1c and lipids, as confirmed in US youths from the SEARCH Nutrition Ancillary Study. In our study we aimed to describe the relationship between components of the MedDiet and metabolic characteristics in children and adolescents with T1D. For this purpose, we recruited sixty-five youths aged 9-18 years who answered to the KIDMED questionnaire, and the International Physical Activity Questionnaire for Adolescents (IPAQ-A) for the assessment of the adherence to the MedDiet and the level of physical activity, respectively. Most of the subjects presented a lower than the recommended average score for the adherence to the MedDiet. 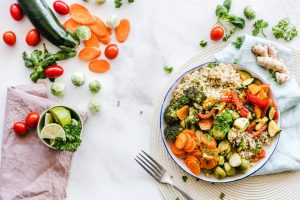 We demonstrated that foods typical of the MedDiet are associated with a better glucose control and metabolic phenotype.

More in detail, we observed a negative association between dairy intake at breakfast and risk of overweight and obesity in young patients with T1D. This could be explained by the nutritional transition to a Western diet in youths in general, more specifically with the choice of sugar-sweetened beverages at breakfast instead of dairy products. Our group had already confirmed the association between increased weight and the habit of skipping breakfast in other populations.

Another risk factor for overweight and obesity in children with T1D was a low intake of nuts and cereals, possibly hiding a high consumption of unhealthy processed foods rich in sugars, saturated and trans fats instead. There’s available evidence of nuts’ protecting role in obesity and weight loss, due to several mechanisms including prolonged chewing, delayed gastric emptying, increased satiety and booster actions on lipid oxidation and thermogenesis. 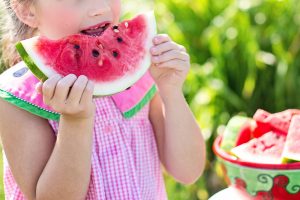 Low mean glucose levels, low HbA1c, and high time in range percentage of glucose (TIR%), an important parameter obtained by flash or continuous glucose monitoring, were all associated with high consumption of fish, cereals at breakfast, and low consumption of sweets and candies. On the contrary, a high HbA1c, an index of worse metabolic control, was mostly related to a high intake of sugar rich sweets, which is consistent with previous data showing that source of carbohydrate intake and glycemic load/index is associated with HbA1c levels. Furthermore, the role of fish described before could result from influence of the macronutrients and micronutrients on metabolic control as well as insulin sensitivity.

We also observed that blood pressure levels were positively influenced by healthy breakfast habits (high consumption of cereals and dairy foods, and lower consumption of processed products). These breakfasts are balanced in nutrients and are typical not only of the MedDiet but also of the DASH diet.

Summing up, a typical low adherence to the MedDiet is associated with a high risk of obesity in T1D, that is on par with the general pediatric and adult population, meaning that these youths should also be continuously empowered with healthy food patterns. The promotion of a MedDiet is a good strategy in the management of T1D, and all parents should be involved to obtain the best results. The promotion of breakfast, as well as discouraging the excessive intake of ultra-processed foods, are confirmed key determinants in the prevention of this nutritional transition, having an important role on glucose and metabolic control.