Life is difficult – there are two ways to respond to that. Either you run away (that is what animals do) or you adapt. Plants are masters of adaptation. They can defend themselves against all kinds of adverse conditions – may it be drought, heat, cold, but also attacks by animals or microbes. However, to defend yourself costs energy that otherwise could be used for growth. When humans started to domesticate plants, they were breeding for fast growth, and for sweet and large fruits. This went on cost of resilience. Thus, domesticated plants need our help to survive – not only do we fertilise them, but we also weed out their competitors, and we combat their enemies with pesticides. Grapevine is a very drastic example – around 70% of fungicide consumption in Europe goes into viticulture. The costs are tremendous – not only in terms of money and labour, but also in terms of ecological footprint. The collateral damage of fungicide treatments is significant and also hits the “good guys”, for instance beneficial fungi in the soil such as mykorrhiza that could help the plant to cope with climate stress or support foraging important nutrients such as phosphorous from the soil.

Could we find alternative ways that reduce the ecological footprint of viticulture in order to develop a more sustainable way of production? To develop such alternatives, we first need to know how plant immunity is working. In humans, we are talking mainly about antibodies in our blood that help us to overcome pathogen attacks. By a kind of genetic lottery, our body develops a large number of cells that present different antibodies on their surface, even directed against targets that we have never encountered and possibly never will. When there is a pathogen attack, at least one of them will fit, like the lock that fits to the key. This match will cause signals that help to proliferate exactly this type of immune cell, such that after some days we are able to overcome the intruder. Obviously, plants do not have a blood system with antibodies, nor do they have this so-called inducible immunity. Their immunity is hard-wired in their genes. How does it work? This is a central topic of our research, and we were able to understand many (but by far not all) of the events that help a grapevine cell to recognise an attack and to deploy a defence response against this attack.

A central element of recognition are receptor proteins that are located on the surface of the cell and can bind to so-called microbial PAMPs. This term stands for Pathogen-Associated Molecular Pattern and means molecules that are shared by an entire group of microbes. For instance, all bacteria have flagella that allow them to move. These flagella are made of a protein called flagellin, and a part of this protein is conserved among bacteria, because it is essential for a flagellum to form. Plants have evolved a flagellin receptor and, thus, can recognise, all bacteria in one sweep. Also, fungi share a common PAMP – chitin, the building material of their cell walls. By means of a chitin receptor, plants can recognise an attack of any fungus, because a fungus inevitable will have chitin on his surface. 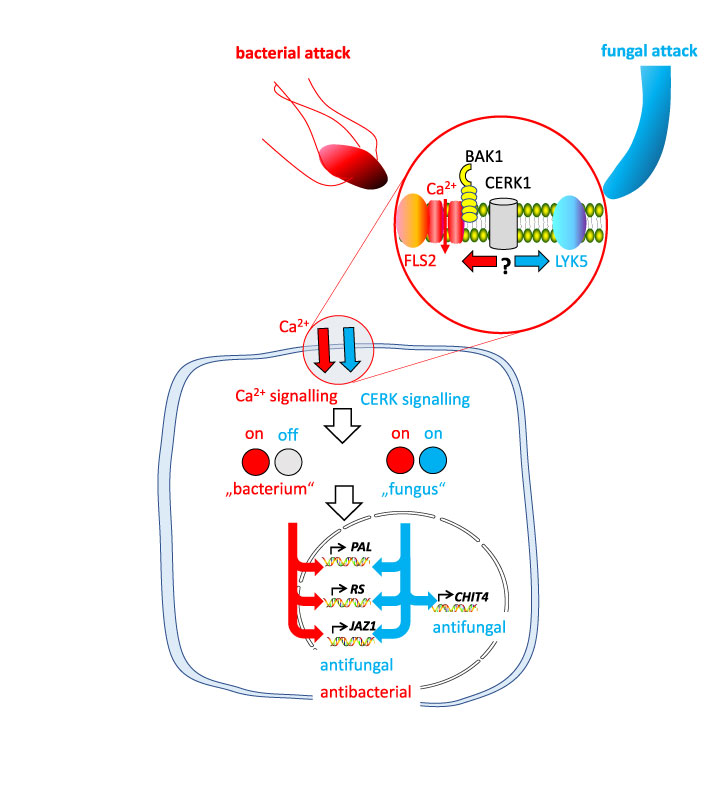 What comes next? The binding of the PAMP to the receptor deploys a signal chain – we found that in response to flagellin a calcium channel opens, such that calcium ions flow into the cell, where they are bound by calcium binding proteins that convey the signal to a cascade of MAP-kinases, proteins that can, upon activation, attach a phosphate to their target and, thus, pass the signal further to the nucleus, where transcription factors (regulators of gene activity) are turned on and bind to the steering domain of other genes that are then becoming active. For instance, in grapevine, genes are activated that produce enzymes converting the amino acid phenylalanine into stilbenes, phenolic defence compounds that can kill the fungus. Likewise, an enzyme called chitinase, can be made that is able to degrade chitin, the building block of fungal cell walls, which will give the intruding fungus a hard time, because its cell wall becomes perforated, such that it will die.

Now, there comes a tricky question – to produce chitinase is a good way to ward off a fungal attack, but it would be a complete waste of resources in case of a bacterial attack, since bacteria do not have chitin. Thus, how does the attacked grapevine “know” whether it is confronted with a pathogenic bacterium or with a fungus? Well, there is a different receptor, so there might be different signals deployed activating a different set of genes that fit to the respective intruder. We tried this out and analysed the early signalling events deployed by chitosan comparing this to the events triggered by the bacterial flagellin, which we had dissected in our earlier research. To our surprise, most events were the same – again, calcium was flowing into the cell, again, a MAP kinase cascade transported the signal into the nucleus, again, stilbene synthesis genes became activated. Obviously, our idea about different signal chains orchestrating different responses was wrong.

We cracked the nut: While both, flagellin and chitosan deployed an influx of calcium, the “meaning” of this calcium influx was different. When we blocked calcium flow by a specific inhibitor (the rare earth element Gadolinium), this suppressed defence in case of a bacterial attack (mimicked by flagellin), but it promoted defence in case of a fungal attack (mimicked by chitosan). The reason is a co-receptor called CERK1 that can be recruited either to support the flagellin receptor, or, alternatively to support the chitin receptor. Depending on its recruitment, it is doing different jobs, so it is a kind of molecular decision maker. When CERK1 is associated with the chitin receptor, it will deploy a second signalling cascade that will modify the response of downstream recipients of the calcium signal. Some that would be activated by a bacterial attack, will be silenced, others that would be silenced by a bacterial attack become active, those that are useful for both pathogen types, will proceed unchanged.

Thus, plant immunity works according to a “grammar”. The meaning of a signal is changed, when a second signal is added – quite similar to human language, where the meaning of words depends on other words are said or not. If we decipher this “grammar” of plant immunity, we might find more specific ways to safeguard viticulture against diseases. This is actually the mission of a EU-funded research project DialogProTec (www.dialogprotec.eu) 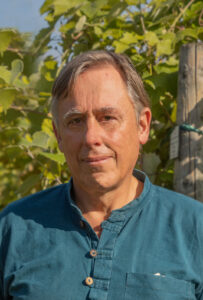