Olive oil is called the oil obtained from the fruits of the European olive (Olea Europea) by means exclusively mechanical and natural methods or treatments, without the addition of chemical improvers or other treatment, at appropriate temperatures that do not cause oil deterioration. For this reason it can be consumed immediately, like all natural juices and differs from other vegetable oils because it is used in its natural form having a unique pleasant taste, excellent aroma and great biological and nutritional value. As a key ingredient in the Mediterranean Diet, it is now one of the most popular food products and has a steadily growing international demand, equivalent to functional foods. It is now well known for olive oil that the nutritional benefits that protect health have a scientifically proven basis. Because a large number of scientific data show how the consumption of olive oil improves cardiovascular function, and exhibits anti-inflammatory action in a wide range of pathological conditions. Its high nutritional value, among other vegetable oils, is based on the high levels of monounsaturated fatty acids it contains, as well as the presence of some secondary components, such as phenolic compounds, which are responsible for many of the health-promoting properties and the unique organoleptic characteristics of olive oil. The polar phenolic fraction of olive oil, also known as bioactive phenols, is in fact a complex mixture of compounds with various chemical structures. The phenolic fraction of olive oil consists of a heterogeneous mixture of compounds with the most abundant being, the simple phenols hydroxytyrosol and tyrosol (3,4-DHPEA, p-HPEA), the aglycones of oleuropein and ligstroside, the aldehydic forms of oleuropein aglycon and ligstroside aglycon (3,4-DHPEA-EA, p-HPEA-EA) which belong to the secoiridoids, the dialdehydic form of decarboxymethyl elenolic acid linked to hydroxytyrosol (oleacein, 3,4-DHPEA-EDA), the dialdehydic form of decarboxymethyl elenolic acid linked to tyrosol (oleocanthal, p-HPEA-EDA), the lignans (1-acetoxypinoresinol, pinoresinol), the acetylated hydroxytyrosol, the flavonoids (luteolin, apigenin), the phenolic acids (p-coumaric acid, vanillic acid) and other secondary substances. Phenolic compounds as antioxidants in olive oil and especially hydroxytyrosol and its derivatives have received special attention in recent years, because they are important parameters in terms of the quality, stability, shelf life, organoleptic characteristics and health benefits of olive oil. Thus, they increase the shelf life of olive oil by slowing down oxidation and affect organoleptic characteristics such as color, bitterness, astringency, and aroma. In general, biophenols have several beneficial properties. These include: Antioxidant action, Anti-inflammatory action, Anti-atherosclerotic action, Anti-cancer action, Anti-microbial action, Antiviral action, Skin protection and Anti-aging action. Systematic and continuous intake of hydrophilic phenols of olive oil has a long-term positive effect on the incidence of various types of cancer and chronic diseases such as cardiovascular disease and type II diabetes. Thus, in 2011 the Panel on Nutrition, Novel Foods and Food Allergens (NDA) Panel of the European Food Safety Authority (EFSA) concluded that there is evidence for a cause-and-effect relationship between the consumption of bioactive phenolic compounds in olive oil and the protection of low-density lipoprotein (LDL), i.e. cholesterol particles from oxidative damage. As a result, the European Commission has introduced the use of a health claim, which can only be used for olive oils containing at least 5 mg of hydroxytyrosol and its derivatives per 20 g of olive oil and noted that positive results are ensured by daily intake of 20 g of such olive oil. 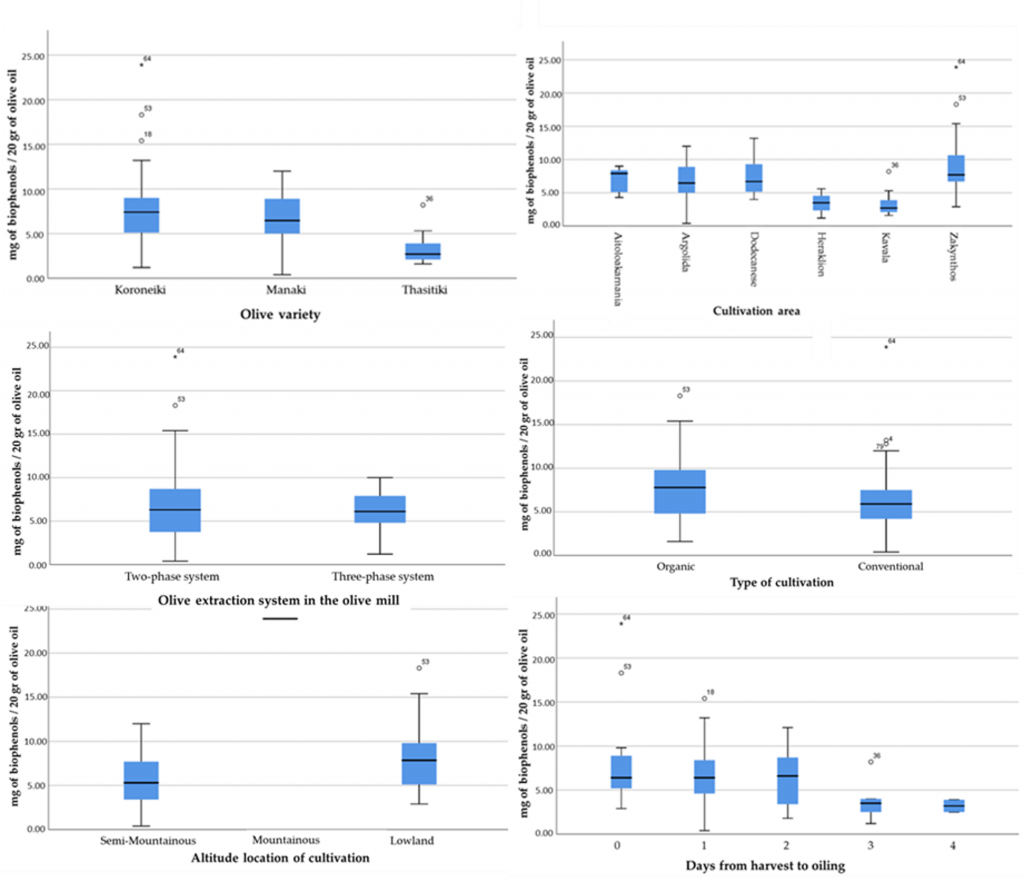 The chemical composition of olive oil varies and depends on many different parameters. For this reason, its content of phenolic components is affected by the variety of the olive, the cultivation area, the applied cultivation techniques, the environmental-climatic conditions, the degree of ripeness of the fruit, the way of collecting the fruit, as well as the type of processing applied during production. The greatest influence seems to be exerted by the ripening stage of the olive fruit during the harvest but also by the cultivated olive variety due to the sequence of specific chemo-types. Thus, the qualitative and quantitative composition of phenolic components is greatly influenced by many variables, related to production processes, maturation stage and storage conditions. The purpose of our study was to evaluate key quality characteristics of olive oil with a main focus on the biophenolic content, its beneficial effects on health and the contribution of any existing health claim to its various quality characteristics and its influence from various parameters. Samples from different traditional oil-producing regions of Greece were initially examined for the most important quality parameters such as the percentage of free acidity, the number of peroxides and the spectrophotometric investigation in the ultraviolet. The samples were then tested for their biophenolic content expressed in milligrams of tyrosol and its derivatives per 20 grams of olive oil using the analytical technique, high performance liquid chromatography (HPLC) by the official method of the International Olive Council. Then, the total of biophenols in the analyzed samples were compared based on the presented intensities in terms of the variety and the area of cultivation, the altitude, the type of cultivation, the extraction system in the mill and the time interval from olive harvest to oiling. Finally, according to the results, the content of olive oil in biophenols as well as the health claim showed to be influenced by the various parameters with which they were compared.

Figure 2. Comparison of the % free acidity (right) and the peroxide value (left) with the results for the health claim.

According to the results of this study in addition to the findings of other studies, it seems that the effect of variety, area, altitude of cultivation, method of extraction, cultivation technique and direct oiling of olives and other factors is very important and largely determines the quality characteristics and the content of biophenols of the olive oil produced. Therefore, in order to ensure high-quality olive oil with high concentrations of biophenols and with a health claim, strict controls are recommended at all stages of the olive production process. Finally, it is important to mention that during the various stages of oiling, large amounts of waste are generated, which are associated with the loss of the polyphenolic components of olives and olive oil.

Charalampos Proestos has a BSc in Chemistry, University of Ioannina, Greece and MSc in Food Science at Reading University, U.K. He obtained his Ph.D. in Food Chemistry at Agricultural University of Athens (AUA), Greece, where he continued his post doc working on natural antioxidants on programs funded by EU and Greece.  After further training at Wageningen University (The Netherlands), he worked as a Research Associate at AUA. He worked as a Chemist for the Hellenic Food Authority (EFET), being food industry auditor and supervisor of the Chemical laboratory in Athens accredited with ISO 17025. Currently he is Associate Professor at the Department of Chemistry, National and Kapodistrian University of Athens and director of the laboratory of Food Chemistry. He has published more than 100 papers in reputed journals. He is Member of the European Committee of the Division of Food Chemistry, European Association of Chemical and Molecular Sciences (EuChemS). His research field focuses on Food antioxidants, foodomics and food contaminants.