By Wesley Zandberg and Matthew Noestheden

2017 was a challenging year for many grape growing and wine producing regions, with severe forest fires impacting crops on five continents. While these devastating natural disasters can cause physical damage to vines and infrastructure, grape and wine producers are increasingly concerned with the impact that the smoke from such fires can have – the vinification of grapes exposed to forest fire smoke  can often lead to wine that possesses a suite of negative aromas and flavors (e.g., ‘ashy’, ‘burnt meat’, ‘band-aid’), as well as a noticeable lack of varietal character. Collectively these wine defects are termed smoke-taint. Since climate change forecasts tell us that the severity and frequency of forest fires will increase in many grape growing regions, smoke-taint is a not only a present, but also a future concern for wine quality. The compounds (i.e., volatile phenolic compounds [VPCs]) thought to be at least partly responsible for smoke-taint are well-known, having been extensively studied in foods and beverages. Problematically, however, these taint-causing VPCs are typically stored within smoke-exposed grapes as a range of glycosidically-bound analogues. Such glycosides possess no organoleptic properties per se. Nevertheless, it is critical to know their concentrations since these glycosidically-bound VPCs can be cleaved by microbial enzymes during fermentation, releasing VPCs that we can taste and smell, yielding smoke-tainted wines from grapes with no perceptible taint characteristics prior to fermentation. Oral microbiota has also been shown to remove the glycoside from VPC-glycosides surviving fermentation, leading to the retro-nasal perception of the liberated VPCs (and thus, also contributing to the perceived smoke-taint). VPC-glycosides are not readily detectible by commonly used analytical techniques such as gas chromatography-mass spectrometry, nor are suitable analytical standards commercially-available. This makes the accurate analysis of their concentrations very challenging. Currently, no analytical tools/methods exist that are capable of accurately providing the potential risk of producing smoke-tainted wines when a winery is faced with using smoke-exposed berries. Rather, the gold-standard approach is to make a small amount of wine from grapes deemed to be at-risk and use sensory analysis to identify smoke taint. This approach, while effective, is highly subjective due to population variance in taste and aroma perception. Moreover, this is a nearly impossible strategy for a vineyard to adopt in the context of a busy harvest schedule, nor does it facilitate the rational development and testing of amelioration strategies. Methods do exist to quantitate VPCs and their sugar-bound forms in grapes, but this approach has been shown to only be 50-80% predictive of perceptible smoke-taint in wine. This poor correlation is not altogether surprising since, while the levels of VPCs and their glycosides in smoke-exposed grapes are indeed higher than in unexposed fruit, several confounding variables limit their usefulness. For example, the wine industry spends huge sums of money on oak barrels, which deliberately introduce into the aging wine some of the same VPCs linked to smoke-taint (e.g., guaiacol and syringol). Moreover, several VPCs are present in grapes naturally, with Shiraz, for example, known to have higher concentrations of guaiacol than other varietals. Finally, like the variation in polyphenolic composition as a function of geography, temperature, varietal, etc., the baseline concentrations of VPCs in grapes not exposed to forest fire smoke shows significant variation. Such variability precludes a blanket approach to predicting smoke-taint (i.e., it is not practical to set a threshold concentration for key VPCs that can be applied globally). 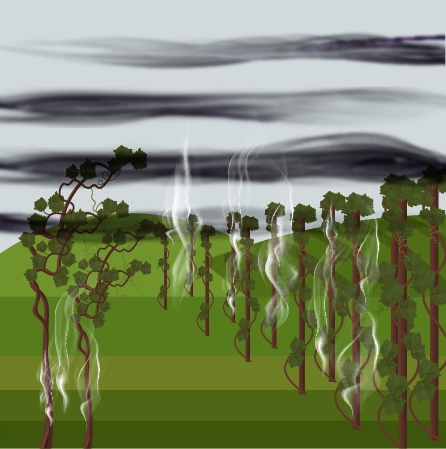 We recently embarked on a two-pronged approach towards developing accurate, predictive smoke-taint tests that do not employ time-consuming fermentations nor subjective sensory tests. First, we have rigorously evaluated all published (and publicly-available) methods for VPC quantification. Consequently, we developed an accurate method that employs a simple, validated acid hydrolysis procedure in order to quantify the total VPC load in berries and wine, inclusive of those stored within grapes as non-volatile glycosides.

Secondly, we conducted a set of field studies in which Cabernet Franc grapes (two weeks after veraison) were exposed to smoke from local fuel sources (Ponderosa pine bark, needles, twigs and forest duff) under controlled conditions. The VPC profiles in these berries and matched controls from the same vineyard were then evaluated through the ripening process and primary fermentation. Analysis of these samples revealed that VPCs were rapidly stored within grapes and were subsequently converted to acid-label glycosides within 24 hours, with both forms remaining stable until commercial maturity. In addition, the levels of free VPCs significantly increased in the wines produced from the smoke-exposed berries relative to the controls. However, we also observed a significant increase in the concentrations of acid-labile VPCs in wines produced from both groups of grapes—in direct contrast with the current literature that assumes VPCs in smoke-tainted wines originate solely from glycosidically-bound VPCs. Thus, our data demonstrate that while VPC-glycosides are elevated in smoke-exposed grapes, they may not be the only contributor to the levels of free VPCs in the resulting wines and other, currently unidentified, storage forms likely exist.
Identifying the major, in-grape storage form of VPCs—whether as simple glycosides or as other putative, but currently unidentified, forms—and monitoring their microbial metabolism during fermentation are both critical for developing practical, objective and accurate smoke-taint assessment techniques. This knowledge will also facilitate the development of potential mitigation or amelioration strategies. However, given our understanding of how the chemical composition of smoke can influence the sensorial characteristics of smoke-taint, and how fuel source, among other variables, can impact smoke composition, it is unlikely that a global solution to smoke-taint exists. Rather, smoke-taint should be dealt with by wine growing regions, with routine monitoring programs set-up to establish baseline levels of VPCs. This approach allows wineries to have a quantitative difference from ‘normal’ and, over time, correlate those values to perceived smoke-taint in wine. Such programs have already been successfully implemented by the Australian Wine Research Institute and ETS Laboratories in California. However, for reasons already highlighted, the onus is on each wine producing region to understand how smoke-taint presents in their grapes and wines. Achieving this will require a conscious and cohesive decision from grape growers and wine producers to invest in understanding smoke-taint in their region. While it can undoubtedly be challenging to achieve unanimity, doing so will help wineries secure the integrity of their supply chain and the quality of their wines as climate changes alters ‘typical’ growing conditions.

Wesley Zandberg earned his PhD in chemistry in 2010 at Simon Fraser University under the supervision of Dr. B Mario Pinto. Prior to this he earned a BSc (honours) degree at Trinity Western University, majoring in biology and chemistry. 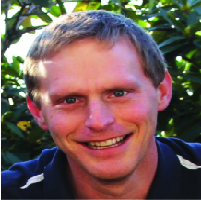 Following his doctoral studies, he remained at SFU in the Laboratory of Chemical Glycobiology, headed by Dr David Vocadlo, until his appointment (in January 2015) as an assistant professor of Chemistry at the University of British Columbia’s (UBC’s) Okanagan campus, located in Kelowna BC, the heart of BC’s wine country. During both his PhD and post-doctoral studies, he has been researching the biological effects of experimental drugs that interfere with normal carbohydrate metabolism in either cell culture or animal models. This research involved the development of numerous analytical tools and methods to study the complex carbohydrates produced by living things. Dr. Zandberg’s research group now specializes in harnessing the techniques and tools of analytical chemistry to study how microbes like yeast and bacteria break down carbohydrate-containing compounds in grapes, wine, milk and dairy products (etc.), in order to better understand the biological impact of these chemical processes.

Matthew Noestheden is currently a PhD candidate in the Department of Chemistry at the University of British Columbia’s Okanagan campus under the supervision of Dr. Wesley F Zandberg. His PhD research is focused on developing new analytical strategies to investigate smoke-taint and the application of these techniques to facilitate the rational design of protective and remediation strategies.

Prior to this he earned a BSc (honours) degree at the University of Saskatchewan, majoring in biochemistry and an MSc in chemistry from the University of Ottawa under the supervision of Dr. John Pezacki. Between his MSc and returning to pursue his PhD, he worked for 10 years as a liquid chromatography-mass spectrometry expert, with notable roles as a consultant for Agilent Technologies and as an application specialist for SCIEX.