By Enrico Battiston and Sara Falsini

Grafting of Vitis vinifera on rootstocks of American Vitis species or of interspecific hybrids of Vitis species, has become a fundamental practice for the formation of a single plant suitable to generate new vineyards.

In particular, among the nursery practices, the applied grafting method strongly affects the quality of the vine propagating material and the overall yield of the nursery. Actually, in addition to the graft incompatibility, the mechanical injuries that occur during this operation can potentially compromise the functionality of the new tissues. In grafting practices, tissue cells are inevitably destroyed, the protective layers of the periderm are damaged and a rapid reaction of the tissues is necessary to prevent the loss of water and, above all, the penetration of pathogens. For this reason, among nursery operations, grafting is a particularly critical phase as the cutting wounds are intrinsically vulnerable to contamination by wood pathogens. At the level of the grafting connection, some researchers have found that machine grafts have a lower incidence of wood pathogens than manually grafted material, tracing this evidence to larger grafting wounds created by the manual method and unsterilized hands.

For this reason, the purpose of our study was to investigate (i) Omega grafting as a mechanical technique, (ii) English double cleft grafting as a manual technique, and (iii) Full Cleft grafting as semi-mechanical technique, comparing their impact on the anatomical development of the grafting point and comparing the functional integrity of the xylem following different grafting techniques by assessing hydraulic traits in the xylem vessels of the scion. To this aim also the incidence in necrotic tissue at the grafting level and the related potential risk of the young grapevine decline in vineyard were evaluated.

The first grafting test regarded the “cultivar factor”: the scions of three different varieties were compared in relation to their susceptibility to the Esca disease complex: Teroldego = low susceptibility, Cabernet Sauvignon = medium susceptibility, Glera = high susceptibility. The scions were grafted on the same Kober 5BB rootstock of the same caliber (variable between 7 and 10 mm), obtaining 250 grafts-cuttings for each grafting methodology. In the second grafting test, the “caliber factor” was evaluated: the scions of the Glera variety were grafted on Kober 5BB rootstocks by comparing the grafting material with two different caliber ranges, thin (6-8 mm) and large (9-11 mm), yielding equally 250 grafts-cuttings for each grafting practice. The two experiments were performed in the nursery (Vitis Rauscedo Sca, Pordenone, Italy): scion (Fig. 1A) and rootstock cuttings (Fig. 1B) were hydrated and disinfected before grafting (Fig. 1C). The propagation material was grafted according to the two different tests (Fig. 1D). Callusing was carried out for 15 days (Fig. 1E) and finally the callused grafted cuttings were selected, discarding the non-conforming material (Fig. 1F). T1  sampling was performed after post-callusin sorting. T2 sampling was performed in the middle of the growing season (Fig. 1G) and T3 sampling was completed at the end of the growing season (Fig. 1H). 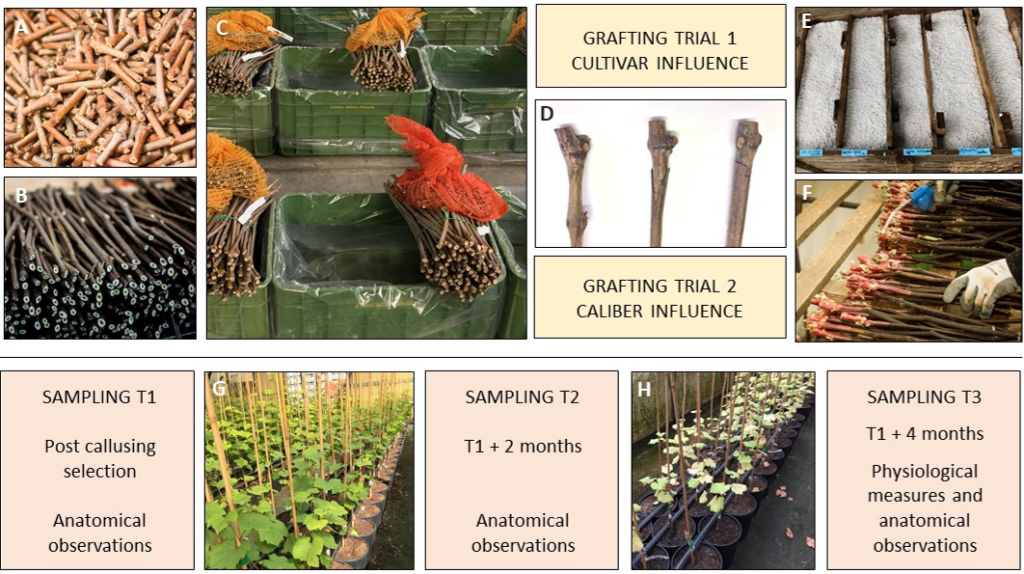 Considering the impact of the three grafting techniques on the junction between bionts at T3 (Fig. 2), the omega graft, compared to the English double cleft graft and the simple cleft, showed a large distance (about 2 mm) between bionts. Thus, the connection was guaranteed by the development of differentiated callus that filled this space, confirming the essential role of this tissue during callusing.

Another important parameter obtained from histological observations is the % of the necrotic area on the graft point: from these results, it should be noted that the omega graft in all cultivars showed the lowest percentage of necrotic areas, revealing a greater capacity of connection between the two bionts at T3, through a balanced callus production.

Concerning the influence of the caliber, at T3, the “thin caliber” condition, in particular for the omega graft, showed the best connection and a significantly lower % of necrotized area than the other conditions. Furthermore, the research has shown that the timing of differentiation of the callus and the vascular elements is the key factor to be evaluated for the quality of the grafting. Anatomical observations revealed that mechanical (omega) and semi-mechanical (simple cleft) graftings have a faster callogenesis while the manual technique (English double cleft) has a slower callus formation but with greater vascularization of differentiated callus, especially immediately after callusing, which is the most critical phase. The English double cleft graft therefore highlighted a slower but desirable anatomical development for better functionality of the grafting point and proximal tissues, overcoming any hypertrophy due to incompatibilities.

The data obtained on propagation material in its first year of production in the nursery are not sufficient to indicate if different grafting methods influence the appearance of differences over the years in the development of foliar symptoms associated with grapevine wood diseases. However, different grafting methods have been found to induce significant changes in vascular tissue formation affecting the development of necrotic areas at the junction. These tissues can then become weak points favouring the colonization by wood pathogens or latent infections. Given the presence at the graft point of less vital and potentially colonizable areas by pathogens, the disinfection action of wood materials with effective substances and strategies remains of fundamental importance.

In conclusion, the vine cultivars  interaction with the grafting method affects the hydraulic functionality of the scion and the growth during the first growing season: considering that a shoot exposed to hydraulic alterations could be more prone to express symptoms of wood diseases or, in the worst cases, to die. The vascular modifications of the scion could have a significant role, and still need to be further investigated, as in the case of the expression of the leaf stripe symptoms associated with the Esca complex.

In this context, the study will continue on the same propagation material planted in the vineyard, through observations on the vines over the years, in order to verify the relationship between the results achieved and the incidence of decline associated with vine wood decay.

From the paper entitled: Xylem anatomy and hydraulic traits in Vitis grafted cuttings in view of their impact on the young grapevine decline, published in Frontiers in Plant Science. https://www.frontiersin.org/articles/10.3389/fpls.2022.1006835/full 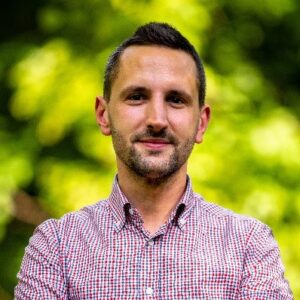 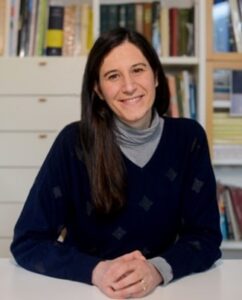 She obtained her degree in Biology and a Ph.D. in Biomedical Science  at the University of Florence, Italy. The expertise acquired during her Ph.D. thesis is on (i) cell and molecular biology, (ii) preparation and characterization of lipid-based vectors for delivery of bioactive molecules. In latest years she has approached the sustainability field and has taken part in a H2020 project on eco-compatible procedures (MEDEAS) and in a Tuscan Regional Government (ECOMAPS). Since the 2019 she is working for the Green Office of the Univerity of Florence in a project regarding the management and innovation in University environmental sustainability. In this context, she is working in studying new sustainable nanotechnologies against fungal species infecting grapevine.