Why wine tasters do not have oral cancer?

I am an enthusiastic about life experiences that involve all senses, tasting wine is one of them. To learn more about it I attended the Wine & Spirit Education Trust (WSET) Level 2 course. We taste a lot of different wines in three days. We taste a similar number of wines that a professional taste in a normal work day. I found myself thinking about why wine tasters do not have oral cavity cancer (OCC).

OCC is a neoplastic condition characterized by the malignant transformation of the lips, oral cavity, or oropharynx cells, and is the tenth most common malignancy in men worldwide whereas in women it is relatively rare and not ranked among the top ten. Different epidemiological studies indicate that the risk associated with OCC increases, when treated as an independent effect, in people who consume ≥30 grams of ethanol per day [1-10]. Relative risks for cancers of the oral cavity and pharynx, oesophagus and larynx is around 5 for an amount around 50 g/day of ethanol [11]. These values are higher than the ones that define moderate consumption (up to 1 drink-equivalent to about 12 g of ethanol- per day in women, up to 2 in men of all types of alcoholic beverages combined) [11]. The carcinogenic effect of light/moderate drinking on the risk of developing OCC remains controversial. The consumption of 2 or less glasses/day was not associated with the risk of OCC [12, 13]. Epidemiological studies reviewed by Poli et al. [14], however, provided evidence that an increased risk for oral and pharyngeal cancer is present also at low doses of alcohol consumption.

Knowing all this, I was expecting that it was possible to found in the literature the description of cases of potential carcinogenic risk associated with occupational exposure to ethanol by ingestion, as the case of wine tasters, but in fact I did not found. It can be argued that this is not an issue, since in that case, wine is not swallowed, but mouthwashes are also not swallowed and there are many studies about their risk to OCC. In fact, since mouthwashes contain ethanol, and sometime the concentration can be as high as 26%. So, I decided to make the question to a friend of mine and well-known epidemiologist Professor Giovanni de Gaetano.

According with Professor Giovanni de Gaetano, wine can have a dual effect, since epidemiological analyses also showed a cancer-preventive effect of phenolic compounds on OCC. Professor Giovanni de Gaetano thinks that both sets of data must be considered when addressing the problem of beneficial or deleterious effects of moderate wine consumption on OCC development in humans. To the best of Professor Giovanni de Gaetano knowledge, at experimental level, some studies were carried out to explore the ethanol carcinogenic mechanisms, whereas others analysed the phenolic protective mechanisms. In the former group, in vivo biokinetic studies mainly focused on the analysis of salivary acetaldehyde. In contrast, the chemopreventive properties of phenolic compounds against oral carcinogenesis were mainly studied using in vitro and in vivo test systems. Likely, the phenolic compounds from wine mitigate the ethanol deleterious effects, decreasing the risk of OCC.

In conclusion we both agree that, although all these studies have yielded important data for understanding the mechanisms of action of either ethanol or phenolic compounds on keratinocyte cells from oral cavity, either normal or tumour cells, much remains to be studied. More adequately powered, randomized, placebo-controlled human studies as well as experimental animal models are required for a better understanding of the effect(s) of wine, particularly when consumed regularly in moderate doses, on oral cells. In conclusion, this area warrants further investigation as a new way of thinking, which is to assess the wine-specific intake risk, considering the additive/synergistic or contrasting effects of its different compounds.

Thanks Professor Giovanni de Gaetano it is always a pleasure to learn with you. 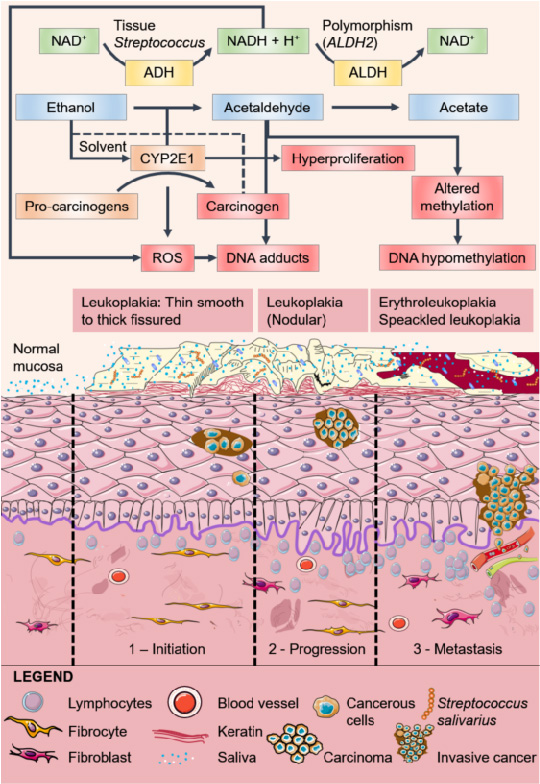 Scheme of the mechanisms by which ethanol may affect oral carcinogenesis. Ethanol is metabolized to acetaldehyde by alcohol dehydrogenase (ADH) and cytochrome P450 2E1 (CYP2E1) in oral cavity, and is further oxidized to acetate by acetaldehyde dehydrogenase (ALDH). ADH-mediated ethanol metabolism results in the generation of reducing equivalents in the form of reduced nicotinamide adenine dinucleotide (NADH) and acetaldehyde, whereas ethanol oxidation by CYP2E1 leads to the production of acetaldehyde, but also to the generation of reactive oxygen species (ROS). Single nucleotide polymorphisms of ALDH2 cause the amount of production and/or oxidation of acetaldehyde to vary between individuals.

Increased CYP2E1 activity not only leads to increased generation of ROS, but also to an increased activation of various environmental agents, such as the pro-carcinogens present in tobacco smoke. Ethanol may also act as a solvent for these carcinogens to enter the cell. Acetaldehyde can bind to DNA, forming stable adducts, and ROS results in lipid peroxidation products such as 4-hydroxynonenal (4-HNE), which binds to DNA to form mutagenic adducts. During cancer promotion, ethanol and acetaldehyde alter methyl transfer, leading to DNA hypomethylation that could change the expression of oncogenes and tumour-suppressor genes. Finally, ethanol-associated immune suppression may facilitate tumour cell spread.A composite illustration of the various clinical appearances of leukoplakia with expected underlying microscopic changes is also showed. Leukoplakia is a premalignant, precancerous, or potentially malignant lesion or condition, which means that there is an increased risk of future malignant transformation into a squamous cell carcinoma either at the site of the leukoplakia or elsewhere in the oral cavity. Lesions become progressively more “severe” toward the right, culminating in erythroleukoplakia, which most frequently demonstrate severe epithelial dysplasia and carcinoma in situ when studied histologically. It should be emphasized that the scheme does not necessarily represent a chronological change, but rather the potential presentations of leukoplakia. Homogeneous leukoplakia is a uniform, flat, thin, and white plaque, with or without fissuring and with a gradual increase of hyperkeratosis and acanthosis. Leukoplakia can also be nonhomogeneous being nodular or flat with a mixed white and red discoloration (“erythroleukoplakia”). The histopathologic features of leukoplakia may vary from hyperkeratosis with or without epithelial dysplasia to various degrees of epithelial dysplasia, carcinoma in situ, and even invasive squamous cell carcinoma. 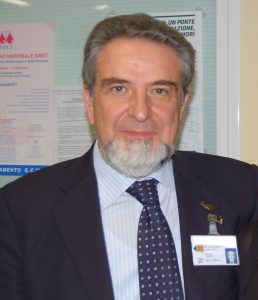